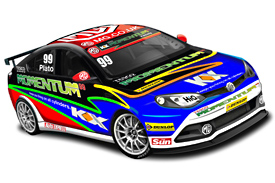 autosport.com
MG has announced a three-year programme in the series and has signed double champion Plato and Andy Neate to drive its MG6 GT cars for 2012. They will run under the MG KX Momentum Racing banner. Triple Eight Race Engineering, which scored over 100 BTCC …

Honest John
The schedule of six race meetings organised by Abingdon-based MG Car Club is detailed below. All offer a varied and interesting programme of races, with a combination of their own championships and other invited championships and series.

An MG is racing at the Hungaroring tomorrow – Mission Accomplished

An MG is racing at the Hungaroring tomorrow – Mission Accomplished

39 entries for 1000 KM of the Hungaroring A provisional entry list on the Le Mans Series website shows 39 entries for the fourth round of the Le Mans Series at the Hungaroring. Five LMP1’s, twelve LMP2’s, seven FLM’s, two GT1’s and thirteen GT2’s can be found on the list, seven more than the last race at the Autodromo do Algarve in Portimao, Portugal. The 1000 KM of the Hungaroring will take place on August 22, 2010 and will be a night race starting at 4 p.m. local time, finishing .

MG is eyeing an assault on the British Touring Car Championship when the sport’s new regulations come into force in 2011, according to a report in this week’s Motorsport News.

Autocar
The firm took the wraps off its new MG6 saloon at the annual MG Live! meeting at Silverstone last weekend and marque chiefs have admitted they are ..